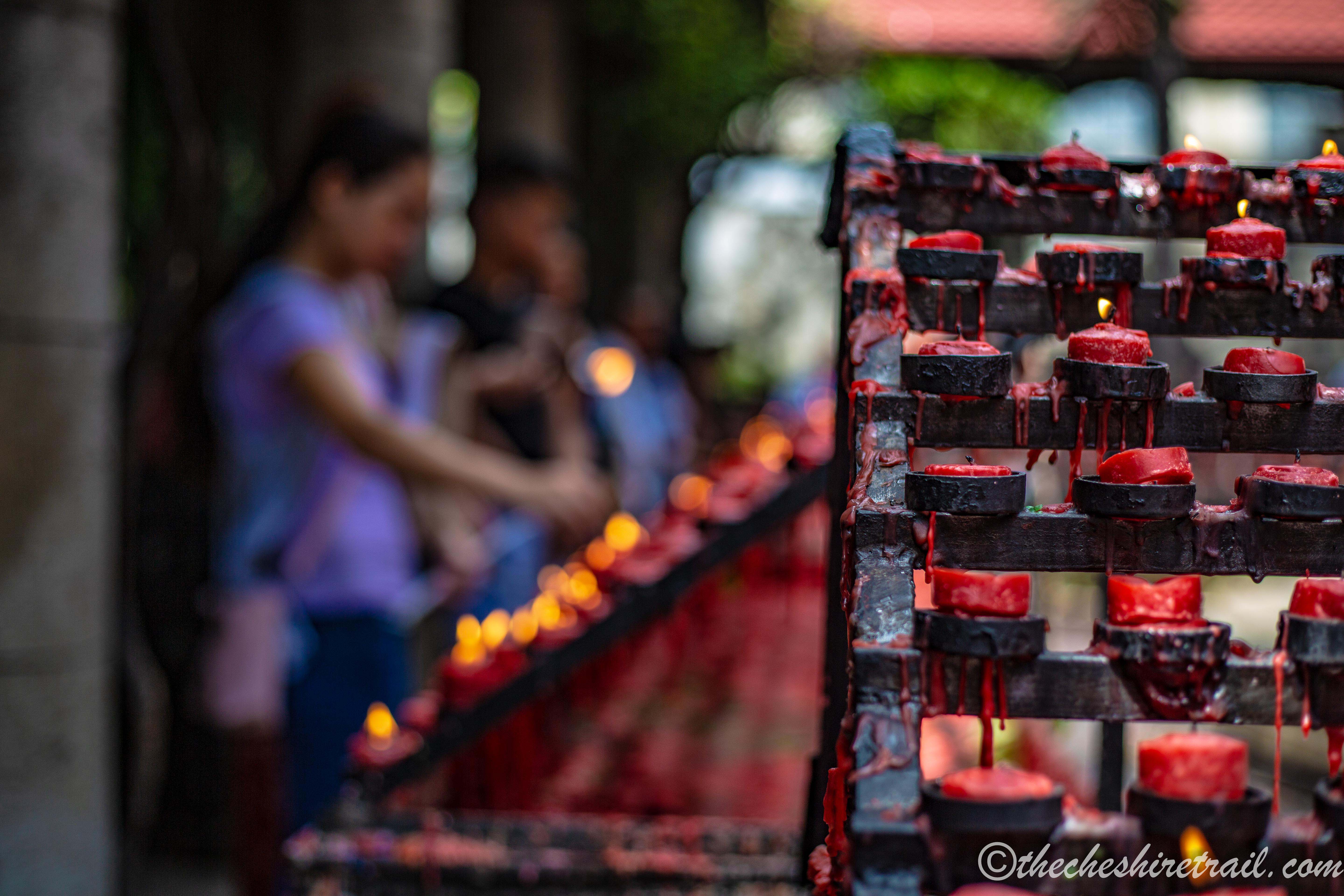 Worship places: a church, two temples, and a guitar factory.

Like a slowly fading dream, my short-lived beachside hiatus becomes yet another pleasant memory. Alas, I was too preoccupied with the sound of gentle waves lapping the shore, the feel of sand (so much sand) between my toes, and the din of laughter and giggling of two very enthusiastic and happy children to even think of snapping a picture. No delicious seafood fare immortalized, nor any scenic images of hammocks on coconut trees with the wistful bokeh of the crystalline ocean and the azure sky behind it. The next thing I knew, like my typical self waking from a much needed nap, we were again packing our bags and getting ready for another adventure.

We crammed ourselves and our luggage into a not-very-roomy-at-all vehicle to be driven to the pier where we boarded a ferry to cross back to Cebu. From there, we split our group in two and took separate cabs to our hotel. Familial affection be damned, one can only suffer being stuffed like sardines in a cramped car on a sweltering day for so long.

I purposefully chose our hotel accommodations for this leg of our trip. It’s swanky by local standards: indoor pool, fitness center, shops in the hotel lobby, a casino… More importantly, this place had a backstory in my life. My mother and I occasionally recall it with much laughter. After getting settled in our rooms, a quick take-away dinner later, we snoozed off. We had more adventures in the morning.

We left Kuya Kim behind in the other island and piled into a different van this time. Our first stop was a fulfillment of a promised ukelele to a very eager young girl who is so much better at playing guitar than I can ever hope to be. The guitar factory was rather low key for a classic tourist stop. It was a single level home with an airy looking hut next to it where men were busy crafting amazing musical works of art.

After we had bought our stuff, we went off to go looking for famous monuments. There was quite the historical battle in this here island hundreds of years ago. One side was fighting for their freedom and right to their ancestral lands, the other side fighting for the belief that the crown they served pretty much owned everything they saw.

Our next stop was rather confusing. Apparently it has quickly become a tourist attraction since it was built. A “temple” built to celebrate a family matriarch seemed noble enough. The obviously fake and cheesily Romanesque frescoes and “sculptures” left me with a bad taste in my mouth. Personally, I found it very ostentatious. Everyone else in my party was having a good time, however. I resigned myself to averting my eyes from the garishness and was rewarded with one of the most amazing views of the city.

The next temple we visited was a real one, this time. It was a tranquil spot among the city’s hustle and bustle. I also had the chance to ask favors of the temple deity. Hopefully I came away as blessed as I felt. At any rate, the peace and tranquility was very welcome at this point in the day.

Our last stop for the day was a church built in the early 1700’s. A lot of parishioners still worship there. Also, being smack in the middle of the city, it is a hub of activity. I left the rest of my party to pay their respects inside the church and went to explore around.

After a late lunch at the local fried chicken chain across the street, we headed back to our hotel for some much needed rest and relaxation. We had souvenirs to pack and there was a pool somewhere in the building whispering my name.