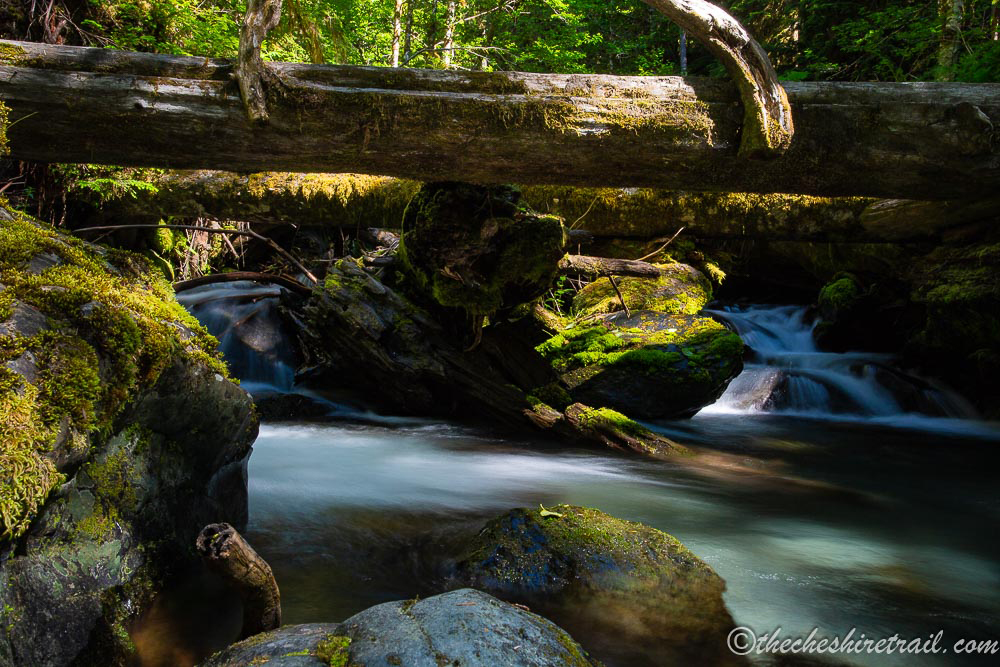 Enchanted Valley. The name makes you think of a lush land full of cheery faerie folk making merry. In the Olympic Peninsula, near Lake Quinault, the trail winds through verdant paths ruled by towering trees. There is a chalet at the end of the trail. It’s not the type where you are welcomed into a great hall full of food and tucked into cozy and comfy beds at the end of the day. The view, however, is more than comparable.

I started out the day early, loading up my gear into the cruiser to catch the ferry that will take me to the peninsula. It takes about 3 hours or so to get from my house to the Park Ranger office in Lake Quinault to pick up my camping permit. I also had to borrow the required bear canister. The area is known for bear sightings and I do not want close encounters of the fluffy kind. We are not in a fairy tale story after all.

Driving from the Park Ranger office to the trailhead was an experience. The paved road fades into gravel quite quickly and you certainly get the sense that you are away from civilization. There are quite a few large pot holes to maneuver past. Thankfully, the cruiser is more than up to the task.

I claimed a spot on the trailhead to park my car and load up. This is only my second multi-day backpacking trip and the first one did not end as well as I had wanted. I am hoping that I will have better luck this time around. I planned on making it all the way to the chalet, perhaps a little past that point and find the world’s biggest recorded hemlock tree. It’s about 30 miles out and back. I am planning on spending 2 nights on the trail. I hope it’s not too ambitious of me.

The first part of the trail is a steady climb. This is where I am reminded that I am not the fastest hiker around, nor am I the fittest. I had to stop several times to catch my breath just in the first 2 miles. I am hoping this is the hardest it gets. The first stop on the way to my camp for the night is a bridge high above a rolling river. There are still a lot of day hikers around, taking pictures, relaxing on the rocks by the river below me.

I wanted to get to O’Neill camp before dark so I marked some interesting waypoints on my gps device and kept going. The park ranger told me my permit allowed me to camp on any established site along the trail but I wanted to be where I knew I would be close to water. The trail is shaded by an almost constant tree canopy but here and there I find green meadows. I spy what looks like a fox (or maybe a coyote?) discreetly following me through the trees to my left.

After 5 or so painful and sore miles of walking uphill and downhill I finally find the camp. It’s just past a dried up creek, a bit below the trail and right by water. I gratefully plop down on a spot by the water. It was my own private little cove. I had a wall of greenery screening me from the trail and a couple of trees shading me with their luscious branches. I pitched camp and set to work on making my dinner. I spent a few minutes surveying the river bank before turning in. There was still a bit of light but I was already bone tired from the day. I wanted to make sure I was rested for tomorrow.

I woke up the next morning to what sounded like a very upset bird somewhere in the trees outside my tent. I suppose I would be annoyed too if a lumbering neon-colored creature set up camp outside my door. I just never expected bird song to ever sound so aggressive.

Breakfast was oatmeal, coffee, and some quiet moments of contemplation. It was a nice start to the day. After packing up my gear and a quick sweep to make sure I did not leave anything, I was back on the trail. The path undulates quite a lot and there were a couple of rivers to cross over make shift bridges made of fallen logs. It was quite a pleasant walk. The shade from the trees and the occasional breeze made the hike quite pleasant. I even ran into a herd of deer grazing on a meadow. They ignored me as I walked by. I stopped for lunch just a little bit past them. I made sure to keep a wide berth just in case they get a little too curious.

By the time I get to the wooden gate shortly before the chalet, I was feeling the strain of the constant up and down of the trail. It is still predominantly uphill but the frequent dips in elevation only made the next hill or crest feel much steeper. Past the wooden gate is the river crossing. It’s a narrow bridge with just one rail. While the river is not that far down below, falling would be quite the misadventure.

After crossing the bridge, the trail evens out quite a bit and opens up. We are out from under the trees now and the sun is warm and pleasant. I spy the occasional wildflower along the path and the chalet just up ahead. When I get to the chalet, I am greeted by a park ranger. He asked me about my trip and checked my permit then let me loose to pick my camp for the day. I find a nice spot by a fallen tree that had an established fire circle. It will make for a nice place to chill later while having dinner. There is a tiny climb down to the riverbed. It is rocky in most places but just a short walk to get water. This time I made sure I knew the way back.

I still had a few hours of light and I had already made camp. I decided to load up a daypack and explore the rest of the trail. The giant hemlock should only be about a mile and a half past the chalet. The day was clear and the sun was getting quite warm. Here the trail began undulating again. There is a steep hill up ahead that began to dampen my mood but I climbed it anyway. As I crested the hill, I was greeted with a scene straight out of the Sound of Music. I was imagining the crescendo of orchestra music in my head as I beheld it. There is a lush green meadow just begging to be frolicked in. Beyond it I could see the mountainside across the river and so many waterfalls. It was absolutely magical.

I was loathe to leave the magical landscape before me but I had to keep going. My goal was to find the giant hemlock. As I kept walking along the trail, it began steeply climbing again. By this time my feet were certainly feeling the strain and the rest of me was beginning to succumb to exhaustion. Begrudgingly, I turned back and trudged back to camp. I will have to find the tree on another trip.

I spent the rest of the afternoon settling down in camp. I made myself a little bonfire. I didn’t really need the warmth as it was late summer and the nights weren’t that cold, even in the backcountry. I just wanted to feel cozy. Besides, you can’t make s’mores without a campfire. After today, I could use a treat.

I tucked myself in for the night as twilight was giving way to evening. I wasn’t sleeping long, however, when I noticed there was a bright light from outside the tent. I got out of the tent to see what the fuss was about, ready to tell off whoever had their headlamp on too high and pointing in my direction. When I got outside and looked around, I realized it wasn’t some errant camper with a too bright flashlight. The moon was full and bright and it was bathing the valley in silver. I had not counted on tonight being a full moon. I grabbed my camera to try and capture the breathtaking scene before me. Alas, I learn upon getting home that my night photography skills were still not up to snuff.

I got up early the next morning. It was 13 or so miles back to the trailhead and I was hoping to get back before it got dark. I ate my morning oatmeal and chugged my coffee before packing up my gear. After a final check to make sure I didn’t forget anything, I headed back. The steep, rocky slope I had to climb down on the way in weighed on my mind. I knew that at some point I will have to climb back up. It will likely be difficult. I tried to keep a steady pace but the undulating path made me feel like I was still going uphill more than I was going downhill. I stopped a couple of times just to get my heavy pack off my back and rest my feet by one of the many bubbling creeks I passed. By lunchtime, I managed to reach the junction to O’Neill camp. There is a small patch of grass right by the trail and a log I could sit on. I decided to take a break there and sit down to eat my lunch.

The rest of the afternoon, I trudged on steadily, occasionally stopping at interesting points on the trail to snap a photo or just pause to take in the scenery. By the time I reached Pony Bridge, it was midafternoon and a pleasant breeze was blowing about. I took another well deserved break to shed my pack. I even spent a few minutes on the bridge just enjoying the view and listening to the rushing water below. It was just the break I needed right before tackling the uphill climb on the rock slope. Now that I felt a bit rested, it turned out to be not as bad as I had been imagining. It didn’t take me long to reach the crest. It was going to be all downhill from there and to me, that was a good thing.

I reached my car by late afternoon. I spent a few more minutes loading my stuff in the car and changing out of my boots into a pair of sandals to make the 3-hour drive back a bit more enjoyable. After stopping by the Park Ranger office to drop off my bear canister and a quick pit stop in town for gas, I was on my way home. Pleasant memories of trees and sunlight cheerfully peeking through the forest canopy and woodland creatures still swimming in my head. It was quite the ordeal but I did not regret going on the trip. Perhaps next time I will get to see the giant hemlock. Hopefully it will still be there, patiently waiting for me.