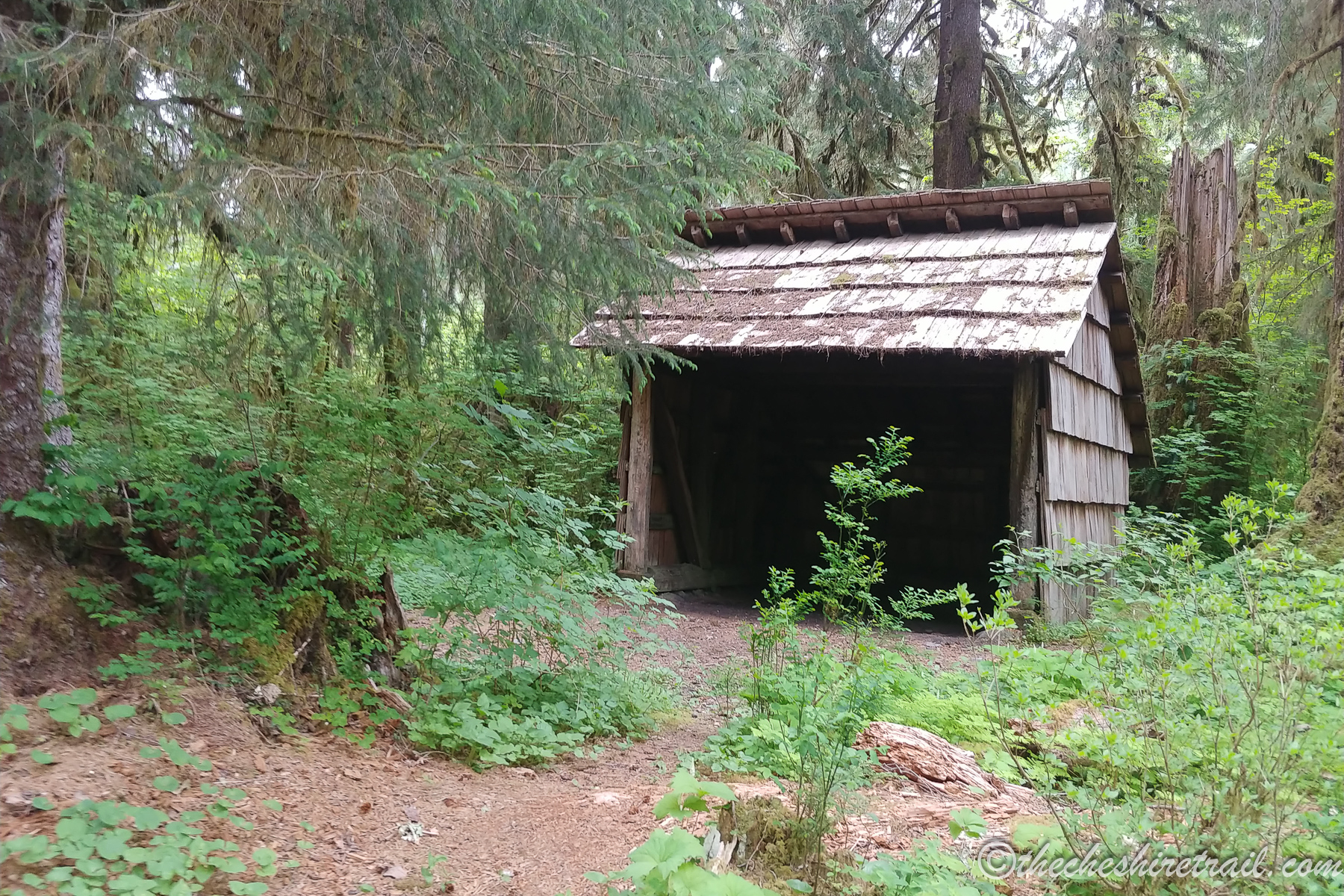 The Hoh River Trail Chapter 2: A day of bad decisions

The trail along the Hoh River meanders pleasantly under a canopy of trees. Occasionally, it winds across a clearing covered with ferns and moss. There are a few creeks along the way. Some of them are easily crossed by hopping on rocks. One or two require balancing on a skinny log bridge – not an easy thing to do for someone who trips on a flat surface (even harder when you have a >25 lbs pack on your back). I could occasionally see horseshoe tracks on the mud, probably from travelers who have brought horses with them to the upper camps.

Day 2 of my first multi-day backpacking trip. I woke up to the sun barely rising past the horizon. Usually, I wake up earlier than that when sleeping outdoors. I suppose being swaddled in my hammock kept me warm and cozy throughout the night. I started my day on a breakfast of coffee and oatmeal. I changed out of my sleep clothes, packed my gear, and got back on the trail. My goal was to make it to Martin Creek and camp there for the night.

I found myself at the Olympus Ranger Station close to lunch time so I decided to take a break. I rested my heavy pack on one of the benches by the station and had some lunch. I spent a few moments taking in the solitude. The ranger station was still closed and there were no other campers in sight. As I was taking a sip of water from my pack, I realized that my water bag was somehow empty. I was pretty sure I had refilled it before leaving camp. It did not seem like a particularly hot day. I couldn’t have possibly drank all my water already, or have I? When I looked down, I noticed the ground by my feet was soaked. I had laid my pack on top of my water hose and had squeezed the bite valve open. It ended up dumping all my water into the ground!

I managed to choke down the rest of my lunch. After I took a few calming breaths, I paused to think. I checked my location on my phone and saw that there was a stream just ahead of me on the trail. I wasn’t sure how far the water was from the camping area at the Ranger Station, or if the river was accessible there at all. I decided to go for the sure thing and got back on the trail to go towards the creek. Luckily, it was not too far from the Ranger Station. It was also a decent sized creek. I was able to refill my water bag before crossing the creek and continuing on my way.

Lesson #1: pay attention to your equipment.

I trudged along the trail as it went steadily upward. I reached the High Hoh Bridge in the early afternoon. The bridge looked pretty impressive. The raging river hundreds of feet below, even more so. I knew the bridge was pretty sturdy. If it could support the weight of a horse, I’m sure it could support mine, heavy backpack and all. However, I was reminded of how afraid I was of heights. It took all of my willpower to fight down the rising panic as I walked across to the other side. That was probably the fastest I had ever walked across the bridge in my life.

As I continued on up the trail, the slopes became noticeably steeper. The trail turned into a narrow ledge on the side of a heavily forested mountain. There were signs of fallen trees around me, as well. Being this early into the hiking season, and the snowy winter not that long ago, I suppose it is to be expected. There were a few blow-downs across the trail that I had to maneuver around and over. Being on a narrow ledge high up a mountain slope did little to help. Neither did being terrified of heights and carrying a heavy backpack. After a few grueling hours of trudging, I found myself at the creek. The trail looked washed out and I could not find a place to cross. There were also a pile of fallen logs across the creek and I was not sure how I would make it through that and up and over the steep bank to the campsite.

I paused by the creek and weighed my options. I was by myself, unsure of my skills, hours (or even days) away from help. I did not see any other hikers pass me on the way up so I did not know if there would be anyone coming down. I decided to forgo the risk and turn around. I remembered seeing a few nice camping spots near the bridge. I headed back towards it. I made it back to the bridge in less than an hour and still had perhaps 2 more hours of daylight. I set up camp and began to get ready to make my supper. As I was finishing up my supper, something niggled at me. For some reason, I decided to pack up camp and head back down. I did not know what possessed me to do so. Something in my lizard-brain told me I should hike down and stay at Lewis Camp instead. It was about 3 miles from the bridge and I was sure I could make it by night fall. That turned out to be the second big mistake of the day.

The sun seemed to have magically disappeared a few minutes into my hike. I did not anticipate it to get dark so quickly. I spent the next hour or so walking as fast as my poor, tired legs could carry me down the trail. The last few hundred feet to the meadow, I had to put on my headlamp just to see where I was going. Luckily, I was able to find the meadow and the sign pointing towards Lewis Meadow campsites.

Lesson #2: Better safe and early than tired in the dark.

I found a nice little spot to camp and began to gather some firewood. Perhaps a campfire would cheer me up. I also decided to get some water. I still had a fair bit left in my pack but I figured I might want to make some soup or hot cocoa before turning in. Also, the forecast was predicting rain early the next day. I wouldn’t want to be trying to find water in the middle of a downpour when snuggling under a tarp in my hammock would sound like a better idea. I put on my headlamp and pocketed my bear spray and water bag and set off towards the river.

Getting to the river from my camp meant crossing a rock field filled with loose rocks and the occasional stranded fallen tree. This also meant that a straight path from point A to point B may not always be possible. I found myself having to walk around logs, up one hilly pile of rock and down another. It took me about 20 minutes of careful stepping and meandering to get to the river and fill up. It took significantly longer to find my way back to camp… Much, much longer.

As I was heading back to camp, I realized that all the meandering got me turned this way and that. I barely recognized where I was. It was too dark to see anything other than silhouettes of trees that looked exactly like every one next to it. I tried to find landmarks that would look familiar. At one point, I decided to make straight for the trees. Perhaps if I walk along the embankment in one direction I would end up in camp. I was wrong. I ended up crashing through the bushes until I gave up and decided to walk back towards the rock field. I spent the next hour or so trying to find my way back to camp. I was tired, hungry, scared, and as close to tears as I ever want to be out in the wild. I have been lost in the city before. This is much worse. Also, did I mention it was going to rain soon?

I decided to retrace my steps back to the river. I was able to find the exact spot where I had filled my water bag. I turned around, and slowly and calmly attempted to recreate my path. I double-checked every turn and closely inspected every fallen tree, every rocky hill. Slowly, things became more familiar and I found myself scrambling up the embankment back to my camp.

Lesson #3: Don’t go wandering about in the dark.

After spending the next 10 minutes admonishing myself for my foolhardiness, I finished setting up camp and sat down for some hot cocoa and a snack. After changing into my sleep clothes, I snuggled into my sleeping bag and promptly fell asleep. It was almost 2 am. That was more than enough adventuring for the day.