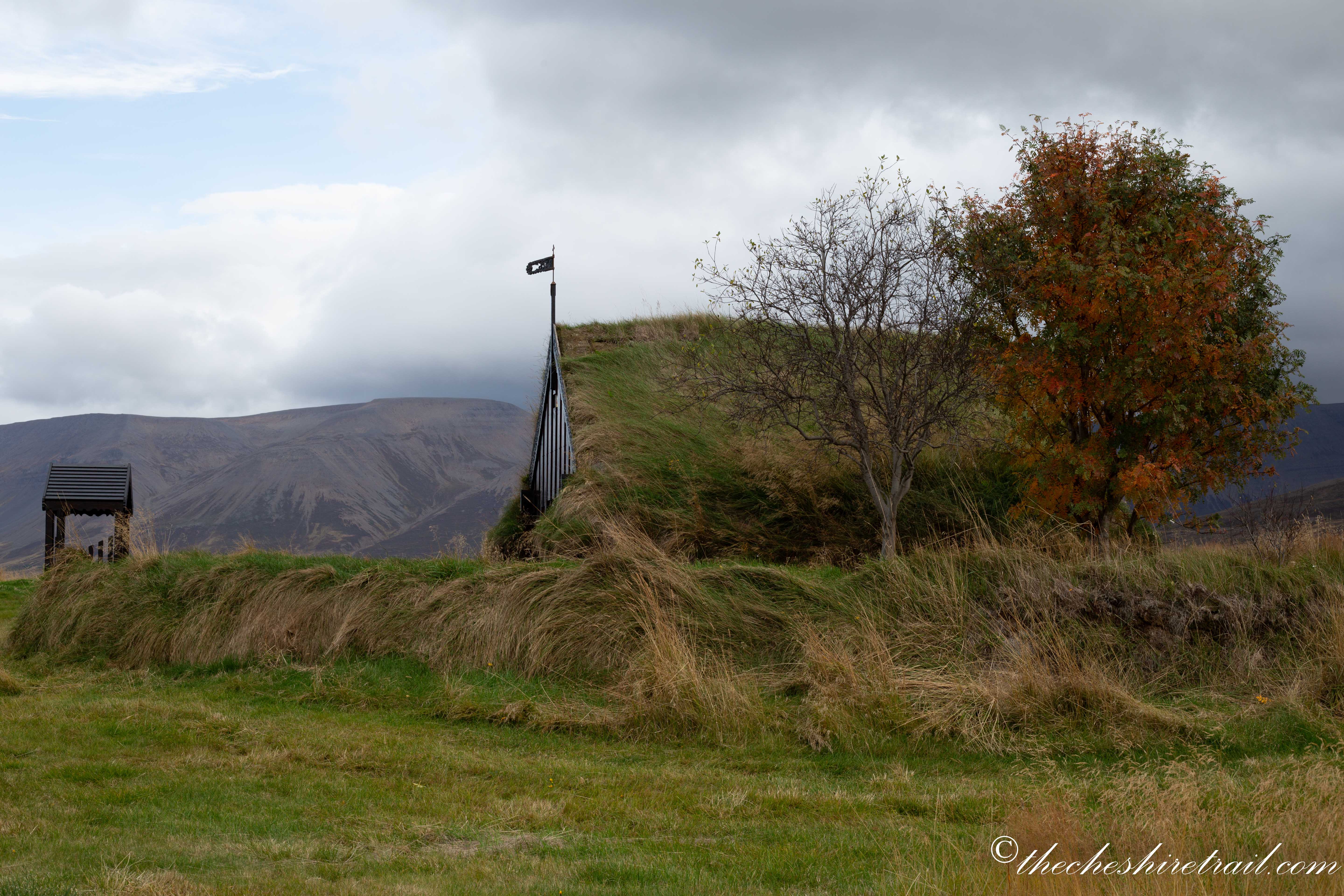 The rural air is certainly doing wonders to my sleeping. I have been waking up feeling more refreshed each morning this week. There was breakfast prepared by our kind host today. I will be sharing the repast with two other guests, a couple from South Korea who are also doing the same adventuring that I was along the Ring Road.

After breakfast, my next stop was going to be one of the oldest turf churches in Iceland, Grafarkirkja. It was maybe a half hour off the main highway in the middle of a field. It faced north into the Norwegian Sea and behind it you can see rolling hills and mountains of Iceland’s interior. It was indeed a very contemplative place.

After visiting the church and maneuvering the process of driving up to the gate, getting out of the car with the engine running, opening the gate, running back to the car to drive through the gate, and repeating the process to close the gate behind me, I was finally back on the road. This time, I was on the hunt for something other than turf churches and waterfalls. I am off to find a sea dragon.

The sea dragon in question is called Hvitserkur. It is a rock formation found on the northern shores of Iceland that resembles a stone dragon (or a warty rhino, depending on how you look at it). There is a low cliff you have to maneuver down from the lookout point to get to the shore. It was especially challenging since most of the steep slope has eroded and the soil is the sort of loose rock that cannot be trusted. I had to ungracefully lower myself down the steep slope with my butt on the ground. My broken ankle did little to help my progress. Eventually, I managed to make it down to the shore. I am hoping it will be easier climbing up than it was to climb down.

After taking photos of the dragon to convince myself it was real, I began to notice the tide slowly starting to come in. I have been often warned by locals about tricky waves that can suddenly pull you into the ocean if you are not careful. I hastily packed my gear and began the climb back up the cliff. Thankfully, it was easier going up, albeit no less ungraceful. On the way back to the car, I ran into the couple from the horse farm in Akureyri. I barely recognized them being all bundled up in their thick jackets and hats and scarves. We said hello and I made my way back to my car. I had a quick lunch before heading out to my next stop.

Kolugljúfur Canyon is an amazing stop on the way to the Snaefellsness peninsula. There is a meandering river that passes by pastoral farms and cascades down into a gorge. The water has done wonders with carving through the basalt turning it into a canyon that fantastic beasts of imagination could call home. I would not be surprised if a dragon lived down there (or a warty rhino).

I was initially planning to spend the rest of the afternoon exploring the Snaefellsness Peninsula before bedding down for the night in Borgarnes. However, I wouldn’t be spending as much time exploring the peninsula as I did not want to be stuck out there or on the road in the dark. I had been told that the weather on the peninsula can be quite intense and unpredictable this time of the year. I decided not to chance it. I can always retrace my route north and do a loop of the peninsula the next day. Reykjavik was less than an hour away from Borgarnes so I could easily make it there tomorrow after a full day of sightseeing in the peninsula.

My accommodations in Borgarnes were beginning to phase me back into city living. This was far different from the quaint and cozy farmhouse cottages and hostels I had stayed in all week. It had all the feel of the typical hotel room. Also, it felt nice having my own bathroom for a change.

For dinner, I had mussels for starters. I had not had shellfish in a while so it was quite a treat. I mopped up the juice from the mussels with fresh bread. Main course was lamb chops (of course) on fries with a side salad. I washed everything down with the local brew. I had a long day tomorrow so I decided to turn in early. Also, there was a tv in my room. I did not realize how much I missed having this modern amenity.

I was about to start winding down for the day when I began hearing a commotion in the hallway. I had seen in my phone app that the northern lights had a high chance of showing up today. I decided to get dressed and see for myself. The hotel grounds was swarming with noisy excited tourists with their cameras incessantly flashing so I decided to walk around town to find a nice quiet spot to myself.

I found a spot just a few feet from a row of houses. It was a nice dim place with just enough light for me to set up my camera. Unfortunately, the northern lights were not as bright as I hoped so I did not get any good pictures. It was still good practice for when I go on the group tour tomorrow. It was pretty cold and windy outside so I decided to go back to my hotel room and rest. On my way back, I found a new friend.

I never pass up an opportunity to pet a willing cat, especially one as fluffy as this one.