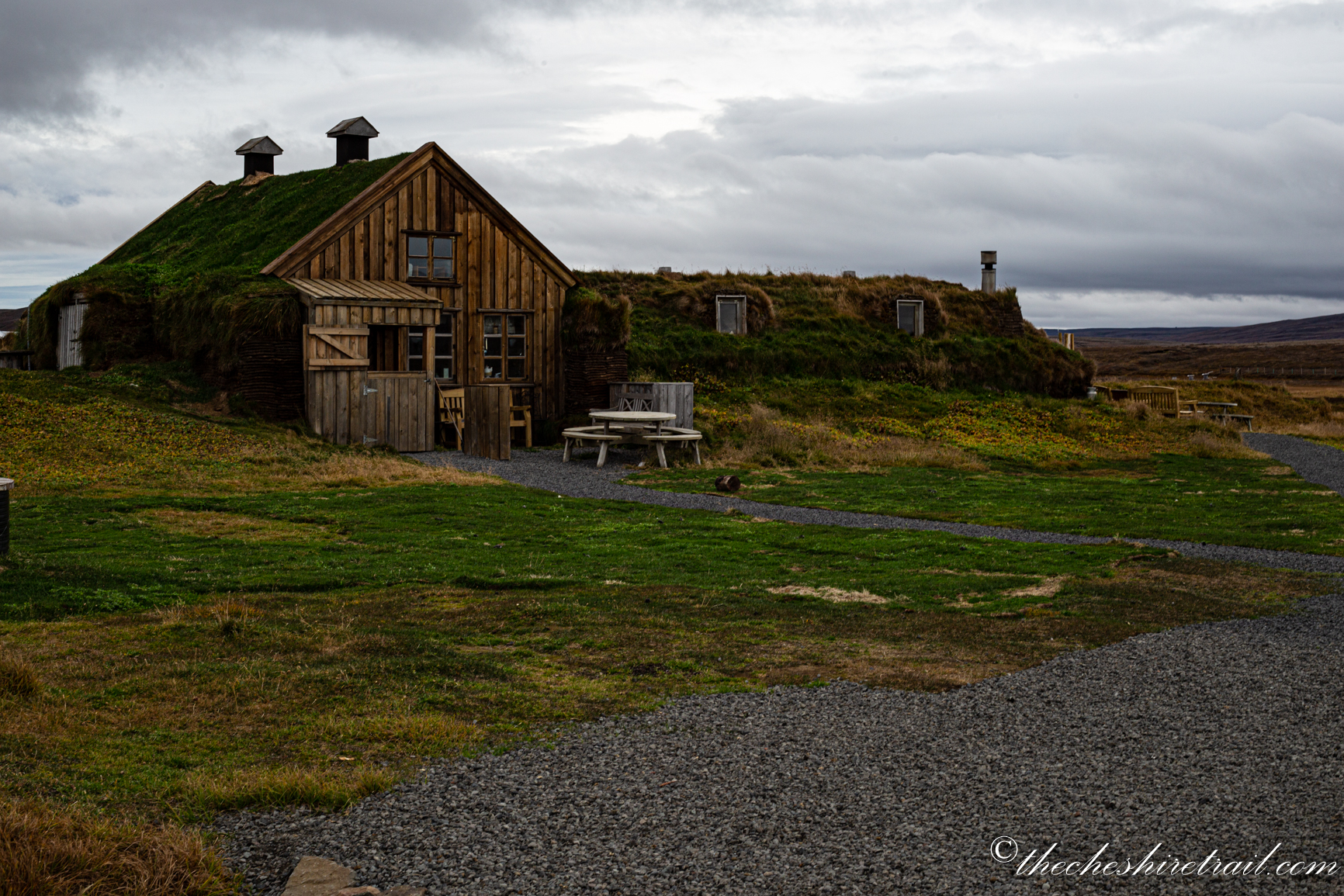 Chapter 5: Halfway ’round the bend and I missed the pancakes by two days

There was no breakfast buffet this time. At least there was hot water for my thermos and for my morning coffee. Luckily, I had come prepared. Breakfast was spent in the car after parking by the church for one last photo op of rainbow lane before the tourists start waking up. Also, I wanted to leave some room for pancakes and coffee from a turf house in the middle of nowhere. I hear it’s a special experience.

I had spied a waterfall on the way down from the pass driving into town. I planned to make the stop there on my way over. I was the first car parked there so I was able to enjoy a little bit of solitude and had the waterfall all to myself for a good half hour before other folks began to filter in.

From the waterfall, I made my way to a seemingly random left turn along the main road to a 20 minute trip down a dirt road with something special at the end. Along the way, I passed by a two-for-one special on waterfalls. It was quite a bargain so I decided to make a stop.

Back on the road, my phone somehow managed to find the correct turn-off from the highway. It was an interesting drive down a rocky road with nothing but more rocks on either side of the road. every crest of the hill promising something just beyond it. After 20-plus minutes of bouncing around, I came to a small farm by a lake. I could see two little turf houses and a couple of sheep grazing by it. Unfortunately, the sign informed me that I missed pancakes and coffee by about 2 days. Summer season was officially over so the residents have closed up shop for the year. Well, I’m here already so I might as well explore a little bit.

I found a guy staying at one of the turf houses and he told me in heavily accented, slightly broken English that he is renting the turf house for a few weeks. He found it through one of the homesharing sites. I figured that would be a great idea for my return trip.

There were no pancakes but there were two very placid sheep munching along. I slowly approached one and propositioned it for a photo shoot. It was very obliging. I decided I would perhaps risk life and limb and pet it. If I got injured, I hope my Garmin emergency service could airlift me out of there to the nearest ER quick enough.

The lack of pancakes was a letdown but petting my first Icelandic sheep made up for it. I decided to motor down to the next town and gas up my car and perhaps grab lunch before heading to my next waterfall.

Thankfully, I had managed to get a decent brunch before getting back on the road. It turns out the road to one of the viewpoints for Dettifoss was going to be an ordeal. From the turn-out, it was 45 minutes of bone-jarring driving along a rocky and muddy road riddled with enormous and deep potholes. Thankfully, the rental was up to the task even if I could not say the same for my back.

I decided to forgo visiting the viewpoint on the other side of the waterfall. It was promising to be another 30+ minutes down another rocky road and I had a hot springs reservation I wanted to make sure I could get to. I decided to head to Myvatn. I still had a couple of stops to make before my reservation at the hot springs and I was beginning to feel lunchy after the 90 minute F-road ordeal.

Lunch was a lamb burger at a cafe next to a tourist attraction. Dimmuborgir is a maze of trails winding around amazing lava and rock formations. Unfortunately, all the jostling from the road to Dettifoss left my injured ankle sore so I had to forgo the hike and sat down to lunch instead. At least I could see some of the park out of the cafe window.

There was also a little cave with an underground hot spring that I had been hearing about so I decided to make my way there. The road going to the cave was a nice drive through some interesting rock formations. The cave itself was tiny and the much-hyped underground spring was a bit underwhelming. There were signs discouraging tourists from taking a swim (dangerous!). Also, the cave being tiny, the many tourists milling about made it feel more unpleasant. Besides, where I was going promised to be way nicer than this one.

After checking in to my quarters for the night and charging my equipment, I decided to recharge myself before dinner and headed for the hot springs. It proved to be a lot less crowded and a lot more pleasant than the Blue Lagoon. Since it was a further drive from the capital, fewer tourists make it there. Chessy and I had a good soak and relaxed in the water for a bit. I actually had to fight to stay awake in the water since it was putting me in a mood to nap.

After the relaxing soak, I headed back to my room to check on my equipment and get ready for dinner. The guesthouse staff recommended a restaurant down the road. I also noticed it was close to a church. Maybe I could do another photo shoot before turning in for the night.

Dinner did not disappoint. I had a starter of some smoked fish on local bread, the soup of the day, and a fish entrée that was delightful. Just as I was finishing up dinner, one of the diners just coming into the restaurant announced that everyone was missing the amazing sunset outside. I was able to capture a shot just as the sun was disappearing into the horizon.

I decided to make a quick stop by the church while the light was still good. It was peaceful and quiet apart from the whinnying of a horse in the distance. One could not help but feel a little contemplative. I said my thanks for another wonderful day before heading back to the guesthouse for the night. After the relaxing soak and the good food, I was ready for bed.