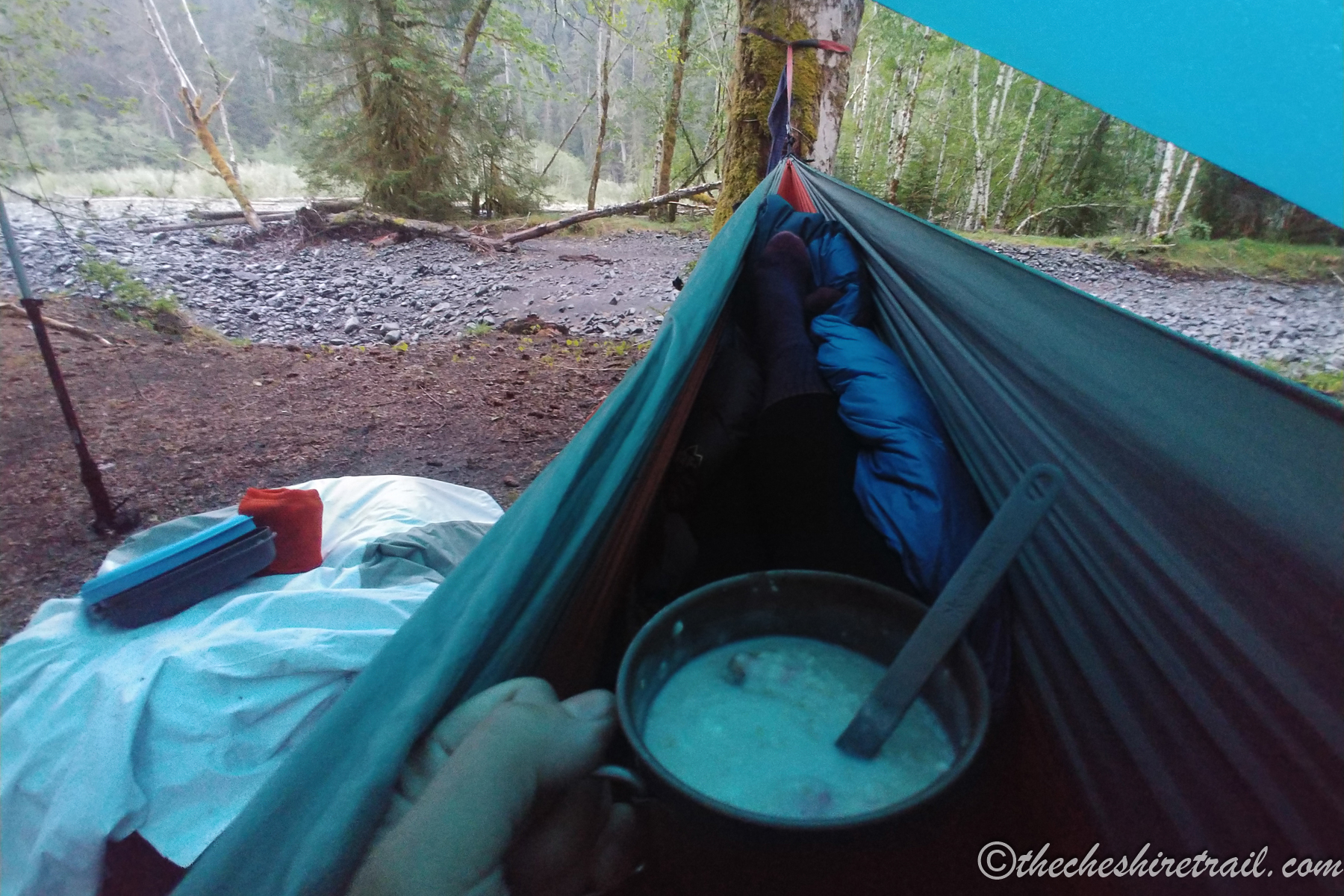 I woke up from my sleep to the pitter-patter of rain on my tarp and the light of day. I had slept clear through to noon, snug as a bug in my sleeping bag and hammock, between the trees. When I finally peeked out of the confines of my hammock, I spy a pair of deer among the trees on the gravel bar across the river. They seemed to not mind me being there. I suppose I was not snoring loud enough to scare the wildlife away.

I began my day by washing the sleep from my face and freshening up before making myself a hot cup of oatmeal. Thankfully, I had a pretty good-sized tarp over my hammock. I had enough room to stretch out and cook my meal without getting wet in the rain or setting my tent on fire. I even decided to have some “breakfast in bed”.

I spent a good hour just chilling in my hammock, listening to the falling rain on my tarp and staring out at the river. Soon enough, I realized something: I get bored very easily. True, I was relishing the solitude, being surrounded by nature. However, I felt restless. My mind began to wander. Thoughts of home began to creep into my consciousness. Also, I missed my cat.

I debated whether to take another nap and maybe explore a bit around camp if the rain let up before it got too dark. My brain was too awake, however. Despite wiggling around in my sleeping bag, trying to get comfy for some shut-eye for a half hour, it was just not in the cards.

I finally and metaphorically put my foot down. I’m going to try making it back to the trail head. It was barely 2 in the afternoon. I figured I had at least 6 hours of light to make the 11 miles or so back to the car, or at least close to it. Last night’s fiasco only proved to me that I was capable of hiking in the dark. So, I packed up my stuff, did a final sweep of my camp, hoisted my pack on and started to walk.

Solitude and silence can only entertain a hyperactive brain for so long. Then I began to feel that the miles are so many and my pace too slow. I tried to pass the time by playing the army game. I looked around the trail for wildlife but it seems the rain had driven most of them into hiding. I did find a lot of slugs, however.

I ran into a deer on the trail that did not seem to care that I was (slowly) barreling down the muddy trail towards it. Making noise with my hiking sticks barely fazed it. I finally resorted to loudly asking it to let me through. Thankfully, when it saw that I was determined to walk the trail, it bounded off into the woods.

When I got to the Guard Station, I noted the distance to the trail head: 10 more miles to go. I must have been farther away than I thought. I felt like I had been walking over an hour. I should be at least 2-3 miles closer by now. Perhaps my boredom was just making time feel so much slower.

I saw a few more deer resting on the meadow just past the Guard Station. I also ran into a young couple headed in the other direction. We exchanged pleasantries. They were planning on heading up to Elk Lake and maybe the Glacier Meadow in the morning. I told them about the blow-downs near Martin Creek and wished them luck.

The monotony of the hike began to get to me. Soon I was starting to feel every achy step, hear every muddy squish of my boot. I began to count the slugs I saw on the ground. Before long, I was beginning to realize that it was getting dark. My yearning for home was getting stronger. I needed to quicken my pace.

The rain was also doing little to improve my quickly fading patience. I was beginning to feel frustrated: at myself for being such a slow hiker, at my pack for being so heavy, at my hiking boots for offering next to no cushion from the rocks on the trail. I was becoming a very unhappy camper.

Thankfully, before it got dark enough to need a headlamp, I was able to reach the Visitor Center and my parked car. All the literal and figurative weight finally lifted off my back as I unloaded my heavy pack on the back of my car, kicked off my boots, and peeled the damp socks from my sore feet. I spent a good few minutes just sitting in my car, scarfing down fig bars and gulping the rest of my water before settling in for the 4-hour drive home.