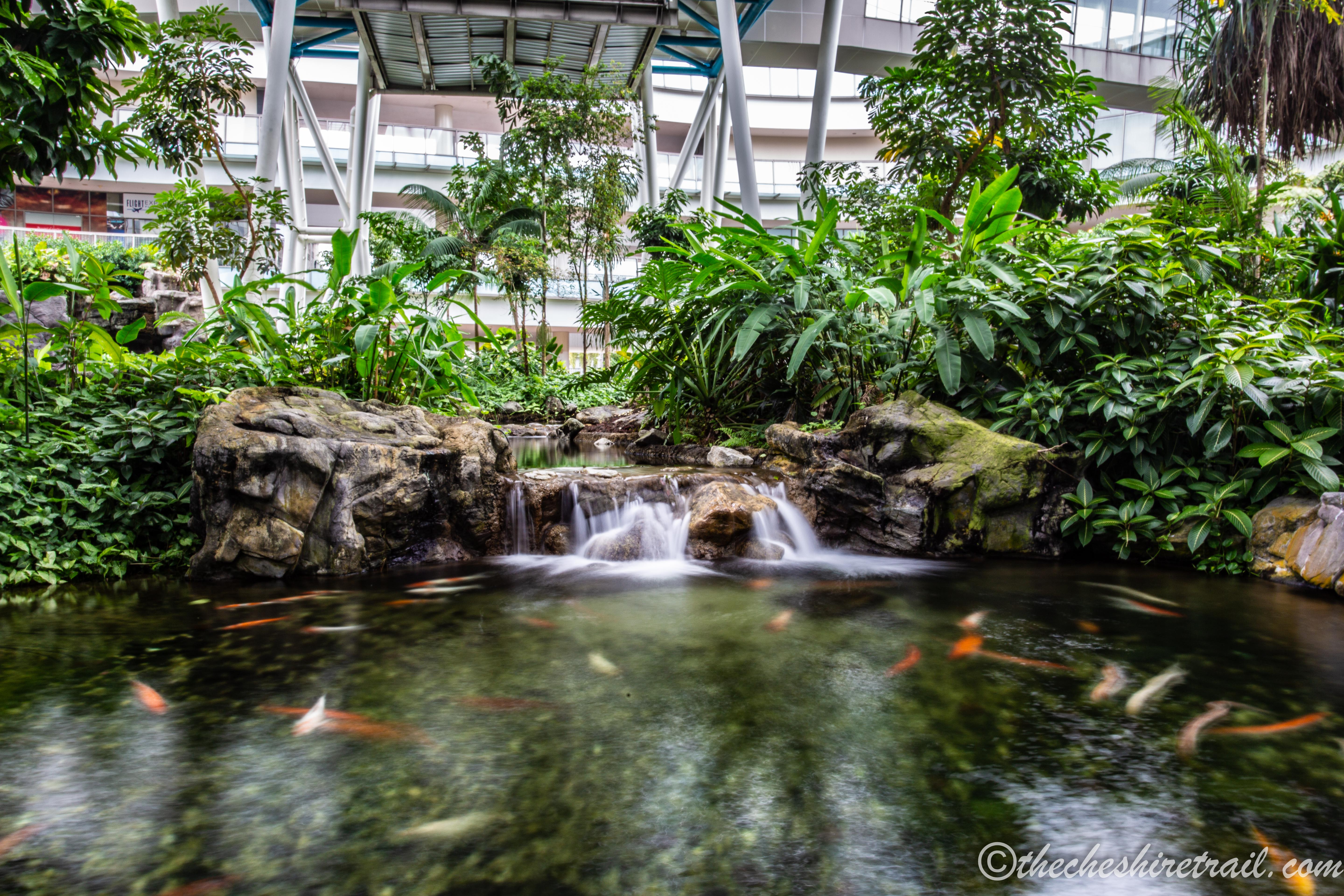 The Garden Beyond the Door, the Lights Down Below, and The Land of Lego Things

There was a very short reprieve before we were off to the next big adventure. I had just enough time to say hello to the duchesses. They seem to slowly fade each time I see them. I always fear that every visit would be the last. I lost a few of the dukes and duchesses while I was on the other side of the looking glass. We swapped stories and refreshed old and happy memories. I hope we have many more visits in the future.

We boarded a late night plane to Singapore: the land of lion-headed mermaids. Since we arrived at Changi airport in the wee hours, we decided to find a quiet place to nap and wait for daylight before we headed to our hotel. Changi is one of the most interesting and nicest airports I have visited so far. There are mobile sculptures hanging from the roof that I could stare at all day long, sparkling clean bathrooms, and food kiosks serving both international and local fare. Their immigration area is very efficient and even during peak hours, I rarely see a line longer than 4 people.

From the airport, we stopped by our hotel to drop off our luggage and took a cab to Gardens By The Bay to spend a little time exploring. The Supertrees were amazing. I’m told that they are even more captivating when they are lit up at night. They are an architectural and biotechnological marvel. Cruising around Singapore, you will also notice little pocket gardens and plant-covered concrete structures. Singapore wasn’t kidding when they decided to turn the “Garden City” into a “City in a Garden”. Despite all the buildings and urban structures, it still felt quite like being surrounded by nature.

Our first two days in the city were spent checking out the food places near our hotel. We stayed in the Katong District along the Marine Parade. Apparently, I had inadvertently picked a hotel smack in the middle of one of the city’s epicurean neighborhoods. We even found several vending machines that made orange juice about as fresh-squeezed as any could ever get.

Day 3 was spent checking out the Shoppes at Marina Bay Sands. All the luxury brands I was familiar with, and some that I have never heard before, are all there. I was never much of a shopper, thankfully. There was, however, a feature in the mall I wanted to take Captain Jack and Binky to: The Digital Light Canvas. It’s an interactive light feature where your steps trigger animations on the floor like a school of fish following you around as you run or walk. I figured I should let the kids burn off some energy so we could all have a good night’s sleep before our big adventure the next day.

I also had a birthday surprise for Binky that day. I booked our group for an all you can eat cheese and chocolate buffet at one of the restaurants atop the Marina Bay Sands. Nothing like gorging on my two favorite things in the world while enjoying the company of my two favorite part-time kids and watching the bay light up below us. The restaurant was also nice enough to bring out a piece of birthday cake for Binky and she got to blow out the candle.

The next day, we got up early to cross the border to Malaysia for the day. We booked tickets to Legoland for the kiddos. Travel time from Singapore to the Legoland theme park, including queuing at immigrations, took a little over an hour and a half so it was about 11 am by the time we got inside the park. It had prerequisite rides for every age so young, old, and those in between were all able to have a good time. There’s also a section of the park with scaled down versions of architectural and landscape features from all over the world all made of Lego blocks. It was a nice break from the rides although since it was summer, the heat dissuaded me from meandering around at a leisurely pace.

Getting back to Singapore from Malaysia at the end of the day, it meant we had enough time to get on the Singapore Flyer. Being from Seattle, I have been on the Great Wheel and it was pretty unnerving. I have a fear of heights that can sometimes take me to the point of ceasing all body functions. I was a bit apprehensive getting on the flyer especially since it does not stop. You have to chase it down the platform as you catch a ride to your gondola. Luckily, it was going at a leisurely enough pace to keep me from tripping on myself trying to get on. The Great Wheel’s pace was actually rather pleasant. I barely felt my heart dropping like it did on the Great Wheel back home. It was just the perfect pace to capture some time-lapse photos of the city lights below.

Day 5 of our trip was spent in Sentosa Island. We had tickets to Universal Studios Sentosa. Binky and Captain Jack had such a good time despite the humidity and summer heat. There were enough of the milder attractions for the weaker-hearted members of our gang as well. After the requisite souvenir shopping, we took the shuttle home for some rest and a dip in the hotel pool.

Our 6th day in The Garden City, we decided to sleep in a bit before we headed out for lunch in Sentosa Island. We ate at Din Tai Fung and the gang enjoyed the dumplings. Even Captain Jack, the ever-picky eater of nothing but chicken-gravy-rice, had a pretty good appetite. After lunch, we visited the S. E. A. Aquarium. The kiddos had fun checking out the marine life. The grown-ups had a nice break being indoors in an air-conditioned place. Despite the crowds, it still felt pleasant and cool.

After the aquarium, we took a cab to the Singapore Zoo for their Night Safari. The zoo is a bit farther from the city. It took us about 45 minutes by cab in moderate traffic. By the time we got to the zoo, the lines were already supremely long. Getting to the zoo at about 5 pm, it was 2 hours before we were finally in the zoo. After about another half hour standing in line for the trolleys that would take us around the zoo to see the animals, the ride itself took barely a half hour. The gang loved it though. I saw animals I only ever see on the Discovery Channel. Being night time, it was also party time for nocturnal animals. It was nice seeing them out and about instead of hiding in the shade like I often do when going to the zoo in the daytime.

One week in Singapore and we still hadn’t run out of things to do. This time, we got day passes for their get on – get off double decker buses so we could ride around the city and look around without having to keep hiring cabs all day. We took Binky to Kinokuniya to shop for school supplies for the coming school year. We then took the trolley to go see the Merlion statue. We also went and ate dinner at Makansutra Glutton’s Bay since it was a short trolley ride away. There was so much variety that even the picky eaters were able to find something to nosh on. Bellies full and legs tired, we headed home to rest.

Our last full day in Singapore was spent shopping at the shopping center across the street from our hotel. We checked out of our room and deposited our bags at the lobby. Our flight wasn’t until the wee hours of the morning the next day so we decided to hang out at the mall for most of the day before heading out to the airport.

If the arrivals area at Changi airport was impressive, the departures area was a shopper’s delight. We bought so much candy and souvenirs for the folks back home before it was time to board our plane. 8 days in Singapore left us all tired when we got off the plane and arrived at the house. It was certainly a very memorable, albeit spendy, week.