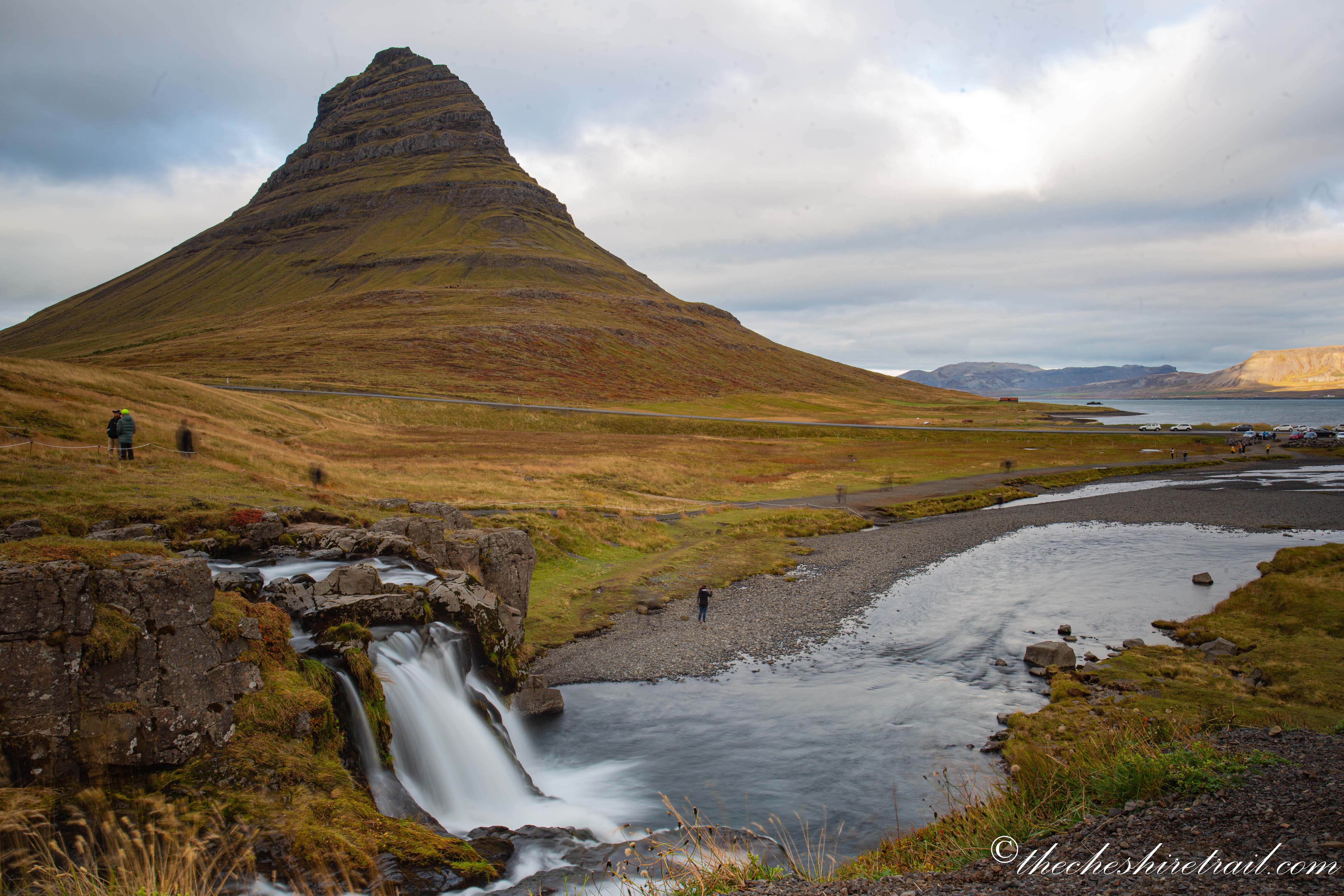 Chapter 8: Howling winds, darkest nights, and a surprise of a tunnel

Today began much like any other day this week except the room was comparatively nicer than the ones I have stayed in although the bed was just as comfortable as ever. It will be my last day before returning to Reykjavik, back to the hustle and bustle of city life. Today is certainly going to be filled with adventure way after the sun goes down.

I never thought I would ever miss hotel buffet breakfast. This would be my first time in a week. The fare is still similar to what I have partaken in the past week. The plates were a lot fancier, I suppose. There’s a bunch of folks who seem to be from a tour group congregating on a table nearby. At least I get to people watch while I eat.

After breakfast, I pile my stuff back in my trusty rental, crank up the tunes, and set my course for the next stop: Snaefellsness peninsula. I plan to drive the main road going around it and stop at the tourist spots. Hopefully, I can get there early enough before the tourist throngs overwhelm the place.

As is typical of this adventure so far, I start the day with a waterfall. And oh what a waterfall it is. From the road, I can see the stream of water coming down from the edge of a cliff at the top of a mountain. It cascades down several stages, winding this way and that before turning into a peaceful stream in the middle of the grassy field.

It’s a short hike from the parking lot to a spot in the field where I could safely set up my gear and take some pictures. As I am getting to the middle of my photo shoot, a couple show up in a car at the parking lot. I watch them hike up the trail while I wait for my camera timer.

The wind is brisk today, just as the weather app on my phone predicted yesterday. I am bundled up warmly. I came prepared… I hope. I have been told that weather in the peninsula can get quite unpredictable. In any case, I have plenty of layers in my car should the need arise.

There is a tiny chapel just across the way from the waterfall. A short drive up the road and I get there just as a busload of tourists show up. I don’t mind the company. I am painfully aware of how close this place is to the capital. The church itself is also quite well known on social media so I am not at all surprised that it gets all this attention.

My third stop for the day is yet another tourist stop. There does not seem to be much to see from the parking lot other than an overpriced cafe. I need to make a pitstop so I buy a bit of lunch so I can use the restroom. The soup is not all that bad. It helps me warm up and the bread was filling. Sitting at a table by the window, at least I have a view of the Atlantic.

There is a profusion of trails in the area. Some lead to rock formations erected hundreds of years ago by men long dead and forgotten. Some lead towards the cliff edge where you could see the ocean below. I opt for the latter.

There is something to be said about the power of water and its persistence. If one were to upgrade the game of rock-paper-scissors and added water, I’m sure it would beat all three. Time and the incessant ebb and flow of tide make the most wondrous rock sculptures.

After enjoying the ocean view for a bit, I decide to explore the other trails. I find one that leads up a hill to a man-made rock formation. I stop to read the plaque for my daily dose of Icelandic history and the usual photo op.

Getting back in the car away from the whipping wind, I set up directions for the next stop. This one is a waterfall that seems to be a bit out of the way. The drive to the coordinates for the “parking area” feels a bit sketchy. The road is just wide enough for my rental and full of loose rocks. I doubt a tourist bus makes it this far. I look up at the sky and I am noticing it slowly getting darker. I check on the car snacks. It looks like I have at least enough to last me the night should I get stuck in bad weather. I touch my gps device with the built-in SOS button for reassurance.

It takes me a while to figure out where the “parking area” is. As it turns out, it is nothing but a wider notch on the rode obscurely flanked by a nondescript picnic table. I pull up on my rental and angle my car to make sure I don’t block the road. There is a faint walking trail notched into the hill with moss-covered rocks on either side. From the map, it looks like the trail should end just before the waterfall. With a twinge of trepidation as the sky slowly begins to look menacing, I set off and follow the trail.

I find the waterfall with little trouble after about 20 minutes of trudging uphill over loose gravel and the occasional mud puddle. I do my best to avoid stepping on the moss flanking the narrow trail. I am rewarded with having the place all to myself for a few precious minutes. A little while later, another hiker shows up with his camera. He is nice enough to set up his gear across the way from me and even asks me if he is in the shot. We spend a few minutes in companionable silence, each engrossed in our own photo shoot.

I hike back to the car and trundle down the rocky road back to the main highway. My next stop is going to take quite a bit of driving. At least the view out my car window is not all bad. The sun is also starting to peek through the clouds. A few minutes away from my next stop, I spy a waterfall in the distance. I did not notice any signs on the road pointing to it. I pull over to the side of the road and notice a car in the distance driving past it. I follow it with my gaze to where it turned to get on the highway and make a mental note. I start up my car and head for the turn out and make my way to the waterfall as close as I can get.

The road runs between some farms and I see a few horses just hanging out by the fence. At one point I drive by a couple with their car parked at the side of the road. The girl is having her photo taken next to one of the horses who managed to get their head through the fence for some human attention.

I find a small parking lot near what appears to be a small park close to the waterfall. I could not see a trail I could safely walk in to get closer to the waterfall and the wind is beginning to pick up. I have to be content with appreciating from afar.

As I am driving back to the highway, I notice a bunch of horses huddled together. I find a spot to park my car off the road and take a few snaps. This one looks like it’s vamping for my camera.

My last stop in the peninsula is one of the more popular ones so I steel myself for the throng of people that will likely be there. It’s already late afternoon and the stop is not too far of a drive from the capital. Thankfully, it is just past a small town. I need to make a quick pit stop, replenish my car snacks supply, and gas up. After some convenience store shopping, I get back on the road and head for my final stop.

The numerous photos online and on social media hardly do the place justice. Despite the crowds, it is still a majestic place. The mountain gracefully arcs in the distance over a meandering stream cascading down the hill in several levels. The fall colors bring warmth to the eyes despite the gray skies and blustery wind. A nice end to my week-long adventure before rejoining civilization.

After spending about an hour taking in the rugged beauty around me, I get back in the car. Music blaring, coordinates set, I head off to Reykjavik. As I get closer to the city, I am seeing more cars on the road. The google maps app is telling me I will be at my destination in the next half hour or so. I begin to get confused. From my car I can see a big body of water between me and the city. I do not know of any ferries in the area nor do I see a dock or large boats on the shore. As I kept driving down the road, it dawned on me like an M. Night Shyamalan plot twist. There is a tunnel. Underwater.

I stamp down the rising panic in my head. There is no way I can stop in the middle of the road. I must keep driving. Down into the tunnel I go. I try not to think about the millions of gallons of water on top of me separated by nothing but concrete and the miracle of human engineering. I can’t drive fast enough to get out the other end of the tunnel. There is a speed limit and everyone else is abiding by it.

I breathe a huge sigh of relief as I finally make it out of the tunnel and back into the waning afternoon light. Eventually, I make it down the highway and find myself downtown. I am able to find a parking garage a block away from my hotel. Lugging my stuff down the street, I head for the hotel and check in. As soon as I settle in to my room for the day, I am left with only a few minutes to grab something to eat before I need to be at the pick up point for the final part of my adventure. Packing my gear into my backpack and bundling myself into my winter jacket, I head out. After a quick stop for a hotdog dinner from the street, I find my way to the pick up point and wait.

The Northern Lights tour involves the most impressive all-terrain vehicle I have ever had the pleasure of riding in. Imagine if a shuttle bus and a monster truck had a baby. The wheels on this behemoth can probably get over anything. The best part, however, is the inside is nice and warm and cozy.

After about a half hour on the road listening to some dad jokes and the occasional history lesson from the tour guide, our group find ourselves in the middle of a farm with the lights of the city twinkling in the distance. I start setting up my camera gear and aimed it at the sky above me. Suddenly, colors start bursting from the horizon. Wave after graceful wave of blues and greens punctuated by occasional bursts of red and orange. The sight was overwhelming. I was thankful for the darkness. I prefer ugly crying out of sight. After I manage to compose myself enough, I finally start snapping away. As my camera fired one timed shot after another, I just stand there, breathless and overwhelmed by so much wonder.